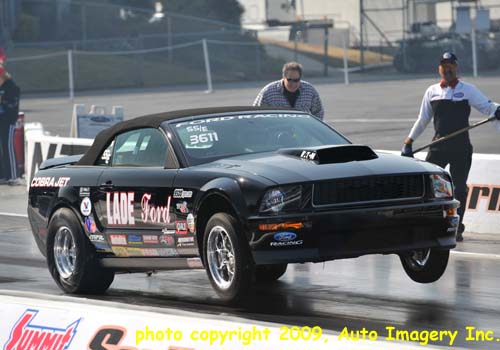 Jim Ronzello and I took delivery of a 2007 Shelby 500 Mustang in early 2008. Some time around Feburary 2008, Ford Racing came up with the idea of building a limited edition 2008 "Cobra Jet" Mustang to compete in NHRA Stock eliminator. We were asked to hold up on the Shelby race program and to construct our Mustang as a 2008 Cobra Jet Mustang. We began construction and fabrication around March 2008. Through out our construction process we were constantly in contact with Ford Racing, giving them engineering feedback and suggestions for the Cobra Jet program. We obtained all of the necessary "Cobra Jet" unique parts hood, hood scoop, front facia, 9 inch "Cobra Jet" real axle, Team Z anti-roll bar rear suspension, lightweight radiator support, ... etc to construct our "Cobra Jet" Mustang. The "Cobra Jet" has a 5.4 Liter Supercharged Engine in it. The engine is rated at 425 horsepower. This car will fit into AA/Stock in NHRA. The "Cobra Jet" was approved by NHRA and was placed in the NHRA classification guide on 12/18/2008. All of the fabrication on our "Cobra Jet" has been completed. Jim and I are now finishing plumbing the fuel system and brakes and fitting the interior and carpet. I will be posting more photos as we complete our "Cobra Jet" Mustang. 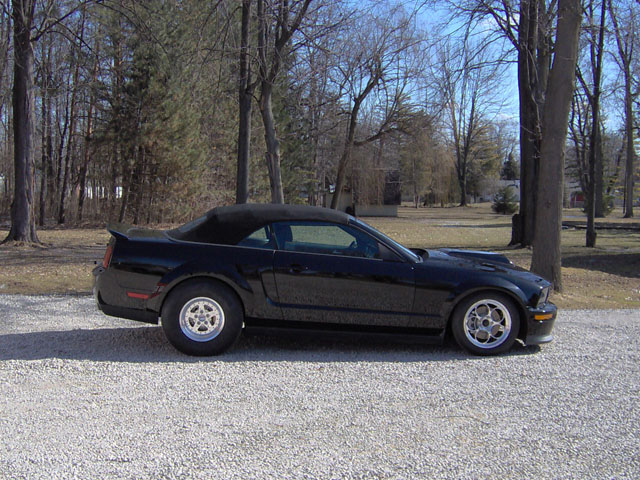